This blog post was written by Jens Olsson, researcher at the Department of aquatic resources,Vice Dean responsible for environmental monitoring and assessment at the NJ-Faculty; and coordinator for SLU Water Forum.

The High-Level Political Forum (HLPF) is an annually recurring meeting that serves as UN’s platform for sustainability and focus on reviewing the progress and achievements of Agenda 2030. This years’ forum took place in early July, and was the first since the pandemic to be held on site in the United Nations headquarters in New York. The theme for the meeting was recovery from the pandemic while also advancing the implementation of Agenda 2030. The Sustainable Development Goals (SGD’s) in focus for the meeting were SDG 4 (Quality Education), 5 (Gender Equality), 14 (Life Below Water), 15 (Life on Land) and 17 (Partnerships for the Goals).

As SLU has extensive and decisive knowledge for the implementation of at least SDG 14 and 15, we were invited by the Government Offices of Sweden to be part of the Swedish delegation for HLPF. In my role as Vice Dean responsible for environmental monitoring and assessment at the NJ-Faculty and coordinator for SLU Water Forum, I participated as SLU’s representative in the delegation.

The reports shared at the meeting on the progress towards global sustainability was anything but positive. Despite that we are approaching the half-time summit of Agenda 2030, it is apparent that goal fulfilment is moving too slow, and in many cases in the opposite direction to what is desired. This is mainly the result of the Corona pandemic and Russia’s invasion of Ukraine, but also due to a lack of political will and societal commitment. The Ministerial declaration following HLPF was also one of the weakest so far, with substantial backlash with regards to gender equality and rights of vulnerable groups.

In spite of this negative development, during HLPF it was clearly stated that we now must go from words to action and accelerate the implementation of the extensive societal transformation needed to reach the ambitious goals of Agenda 2030. This also to hamper the impact of the concurrent and multiple global crises including climate change, biodiversity loss and pollution. What was also obvious at the meeting is that the perspectives of young and vulnerable people are essential for this transformation to happen, as is making use of local knowledge from, among others, indigenous people. It was concluded that economic growth needs to be decoupled from negative impacts on biodiversity, and that we are at a stage in time where knowledge for reaching the goals is available. Now, perhaps more than ever before, political will and societal commitment are essential to move from words to action.

For me this was a true personal experience, and despite the reports of slow progress and backlash towards reaching the goals of the Agenda in 2030, it was fascinating to see and meet that many countries and committed people in one place at one time. In spite of all the bad news, the spirit of hope was present, and I witnessed that the majority of participating countries shared their ambitions for a more sustainable future. It was also instructive to be part of a large and inclusive delegation with participation from a wide range of disciplines and backgrounds including representatives from governmental agencies (for example The Swedish Environmental Protection Agency and The Swedish Agency for Marine and Water Management), the civil societies, youth organisations and municipalities, and also politicians.

I think that for the implementation of Agenda 2030 in Sweden and beyond, SLU has a key role to play. However, we need to raise awareness of the Agenda in our organisation and accelerate our positive impact and contribution to social and environmental sustainability. Even more, I believe that we as a university can make a greater contribution with knowledge, data, advice, innovation and education to support the achievement of the ambitious goals of the Agenda.

By: Alin Kadfak SIANI-SLU Global Communicator and Researcher at the Department of Urban and Rural Development at SLU
This blog was originally posted at SIANI website

Aquaculture has a tricky reputation; the fish meal is one reason why. But with new research from the Swedish University of Agricultural Sciences (SLU), the unsustainable fish feed can become a problem of the past.

Low in saturated fats and high in omega-3, fish has become a popular food choice. Some regions of the world, like Oceania or coastal countries in Asia and Africa, have always had fish-based diets, but recent trends in healthy eating among Americans and Europeans has driven the demand up. Now, we eat fish twice as fast as the fisheries can reproduce. So, unfortunately, the change of heart in eating habits depleted global fish stocks. And, more and more of the fish we eat comes from fish farms.

But the origins of fish feed are yet another sustainability controversy.

Quality fish meal is essential for optimum development, growth and reproduction of the fish. Traditionally, fish meal has been made of wild-caught fish or by-products of fish waste. This conventional method doesn’t only put pressure on marine resources, but also competes for food security because local people could eat the small nutritious fish, instead, it is used for animal feed.

Plant-based feeds were developed to address these concerns. And in the last three decades, plant-based feeds took over animal-based feeds and became the main ingredient for fish meal across the aquaculture industry.

However, this solution brought other challenges: the production of plant-based feeds increases the pressure on land. For example, soy, which is often used for making fishmeal, requires a lot of land, fertilizer and freshwater. Soy farming is notorious when it comes to deforestation in the Amazon and environmental destruction in the Brazilian Cerrado. That is why, for instance, Norwegian farmed salmon producers banned fish meal ingredients made from Brazillian soy.

So, the fish industry is still on the lookout for a better protein substitution.

Using microbes, like yeast, fungi, microalgae and mollusks to feed farmed fish has gained attention in recent years. These four categories of microorganisms are promising and can potentially help us make a breakthrough in the sustainability of aquaculture. For one thing, these microorganisms can feed on various carbon sources, including waste streams from wood industry or marine productions.

SLU aquaculture research team partnered with scientists from Norway, Vietnam, Cambodia, Australia, Tanzania, India and Rwanda to develop sustainable aquaculture feeds. Micro-fungi is the most promising microbes – the team can replace 20% of soy-based feed for salmon with the protein extracted from micro-fungi without any side effects. SLU researchers are also looking into making quality fish feed from insects that feed on household waste. Some promising research with black soldier flies has already been done and applied at scale to treat organic waste and to produce animal feed at the same time. Another fishmeal substitution could be muscles, and their use has been successfully tested by researchers at Södertörns högskola, another Swedish university.

The pilots are yet to be scaled up and industrial development of the sustainable fishmeal will certainly require closer collaboration between the industry and the researchers as well as further research on its own. However, insects, yeast and fungi can be another rising star in the kingdom of alternative protein, at least in the field of animal feed.

What can consumers do for now?

KRAV, Swedish Sigill and ASC are the main sustainable aquaculture labels available in Sweden today. Apart from fish meal, which is considered to be main focus in the sustainability of aquaculture, these standards also take into consideration animal welfare (if the fish is grown in a cage and the use of medicine), land and water pollution, and slaughtering practices. For instance, KRAV is currently working on their new KRAV label in aquaculture to improve the feed the slaughter method. ASC’s standard includes limits on the use of antibiotics, water purification and traceability to the cultivation site. ASC has also added social criteria to their standard, such as freedom to form an association and a ban on child labour. Svenskt Sigill is a new label, which focuses mostly on fish that grow in closed systems on land. Consumers can study and pay attention to these labels before buying aquaculture products in Sweden.

So, who knows, maybe we are at the crossroads for the next paradigm shift in aquaculture feeds! 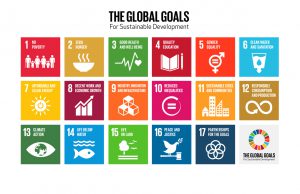 This blog is about global development contributing to Agenda 2030 and the Sustainable Development Goals (SDGs). SLU with its mission, to develop knowledge and capacity for sustainable management and use of natural resources has an important role to play in the implementation of Agenda 2030.

SLU’s global collaboration is broad and diverse and focuses on knowledge and capacity that contribute to achieving the SDGs. Capacity development efforts play a specific role in low-income countries, where the advancement of local universities of high quality has a fundamental impact on increasing the relevance and sustainability of the development agenda in the society at large. Researchers and staff at the departments and units at our university are actively engaged in these collaborations, from broad institutional partnerships to research collaborations at the individual level.

SLU’s research covers food security, production systems and natural resources on land and in water as well as rural development and biobased materials that can replace fossil fuels and materials. We conduct research on climate change mitigation and adaptation, the interaction between urban and rural environments, ecosystems and biodiversity, animals in the service of humans, zonooses and antibiotic resistance; and sustainable urban development. We are proud of the fact that more than 20% of the publications at SLU are joint works with partners in low- and middle income countries.

Society needs people who can face the challenges of today and of the future. At SLU we give our students possibilities to make a substantial difference. The students are trained to understand future global challenges and to contribute to finding answers and solutions. By training students in these matters, SLU contributes to solving the biggest problems of our time.

In this blog you will find posts from students, researchers, teachers and staff at SLU, as well as the occasional guest blogger, all somehow engaged in global development. We hope that you will enjoy the reading and also that you would like to contribute to the blog by writing a post or two!

Welcome to contact us if you want to make a blog post! Send an email to global@slu.se

The blog is administered by SLU Global.
SLU Global is a unit at the Vice-Chancellor’s Office and we support and facilitate SLU’s commitment to improve the situation for people in low-income countries based on the Sustainable Development Goals of the Agenda 2030.