The formula quantifies the sum of the basal areas of all trees that are larger or equal in basal area compared to that of a given tree i at time t. It is the complement value of the basal area percentile [latex]p_i(t)[/latex] of tree i denoting relative dominance, where G(t) is basal area per hectare of a given forest stand at time t. Basal area of an individual tree is the cross-sectional area of its stem usually measured at 1.3 m above ground level. For convenience basal area is often calculated from stem diameter using the area formula of a circle. Basal area per hectare is a density measure taking both number of trees and their sizes in a certain area into account.

RS(t) is referred to as relative spacing, another density measure linking average growing space with top or dominant height, [latex]H_{100}(t)[/latex], a characteristic of growth and site quality. Top or dominant height is often calculated as the mean height of the hundred largest trees per hectare. BALMOD(t) is useful in situations where a competition index is needed for fitting a function estimating growth rates from a multiple number of different time series scattered across a certain larger geographic entity, for example a country or even a continent. In such a context, Schröder and Gadow (1999) found that  BALMOD(t) is superior to BAL(t). Other authors have applied the BAL concept to crown variables and Burkhart and Tomé (2012, p. 202ff.) give a good overview. 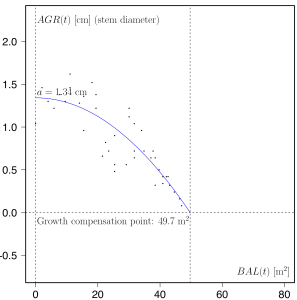 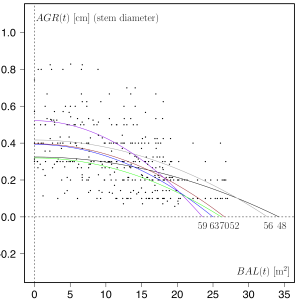 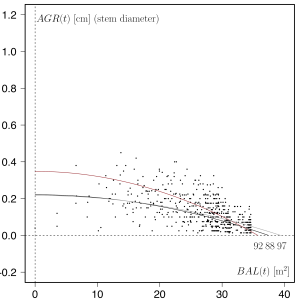