We had two contributions to the conference this summer; “Evaluation of reusable hiding units for rearing house crickets” (M. Vaga, E. Gustafsson, A. Jansson) and also “Morphology and localization of carbonic anhydrase in the digestive tract of the house cricket” (L. Holm, E. Thorsson, A. Jansson). The latter abstract was based on the work by veterinary student Elina Thorsson and her master Thesis (to be found here: https://slub-primo.hosted.exlibrisgroup.com/primo-explore/fulldisplay?docid=SLUB_EPSILON_STUD13415&context=L&vid=SLUB_V1&search_scope=default_scope&tab=default_tab&lang=sv_SE).

The project has been subject to a lot of media attention during this autumn! First a journalist from “Universitetsläraren” was here and then also Swedish Televison and UNT (Uppsala Nya tidning)!

A French veterinary student did his internship with us this summer! He participated in a study on sodium intake in the house cricket.

From the “Foodology day” (below) we have a photo on the cricket dish and the recipe created by the famous Swedish chef Paul Svensson. Looks tasty doesn’t it? 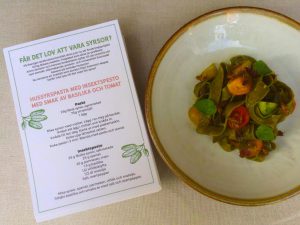 Just out is our paper were we point out specifics for insect rearing facilities on different scales, and a way forward how these can be developed. Read our paper here!

We have just recently published a paper in EFSA Journal (vol 16, 2018) entitled: “Novel foods: a risk profile for the house cricket (Acheta domesticus)”

Today we participate in the annual (“Foodology day”) in central Stockholm Matologidag http://matologi.nu. This is a large event open for all, where research and knowledge about food is presented. We have one of Swedens most famous chefs Paul Svensson that have made dishes from our crickets. Come and see us, check out our research and those dishes!

Here you find us!

Doug Hunter’s masters thesis that we have mentioned below have received a fair bit of attention and have been mentioned on SLU’s homepage. We are happy about that!

Douglas Hunter has recently defended his MSc thesis Feeding the 45 million:
Substituting soybean protein with insect protein within EU poultry & egg production
at the Department of Ecology, SLU. His thesis shows that there is a possibility of massive land winnings with a substitution from soybean meal to insects reared on food bi-products in the poultry industry. Such change in feed could reduce the existing land-convertion pressure on forests to become agricultural land around the globe.

We are looking for a master student that would like to work within the topic: Swedish consumers’ perception and ethical reflection regarding insects as food. Contact supervisor Helena Röcklinsberg (Helena.Rocklinsberg@slu.se)

Swedish consumers’ perception and ethical reflection regarding insects as food

Insects are consumed in many parts of the world, but are rather part of a new cuisine in Sweden and northern Europe. In contrast to many European countries it is not allowed to produce food based on insects in Sweden. However, legal changes may lie ahead and within the Formas project “Eating crickets – an appetizing solution for today’s global problems” we are interested in investigating Swedish consumers’ ethical arguments regarding consumption of traditional livestock vs insects and attitudes to the use of livestock to provide ecosystem services. We envisage an interview study focussing on the following issues: How is eating insects perceived among Swedish consumers? Do they perceive a difference between eating insects as an ingredient (in e.g. a protein bar) or the whole insect (e.g.as a grilled snack)? What do meat eaters, vegetarians and vegans think respectively about eating insects? What arguments beyond taste and yack factor are used in approving or disapproving of farming insects for food – are informants referring to sustainability, biodiversity, climate or animal welfare? Are the same or other arguments used with regard to eating meat from ruminants, pigs and poultry?

Method: interviews with citizens/consumers, followed by a content analysis and ethical elaboration.