It often occurred to me that it is a pity to be able to read finished research papers only. As we all know, they have to be very concise and can only report a selection of the most positive outcomes of everybody’s research. However, this is only the tip of the iceberg, isn’t it? There usually is much more to it. Much delight, of course, but also struggle, much frustration when the results turn out a different way than expected or when the reviewers fail to see the point of the paper. In fact in summer this year I have received an interesting email where an eminent researcher stated: “It seems crazy, but my experience has been the more novel my ideas, the more likely they are to get rejected from publication.” Many of his colleagues responded to this by saying: “Me too”. I think this is encouraging and disappointing at the same time. It highlights one of the failures of the current peer-review system but also tells us that we have to try even harder to tell the fascinating stories of our research.

Every research usually has quite a bit of background history that doesn’t get published. Of course, not every single bit of our research is a hit and may be as fascinating as the discovery of the DNA double helix by Watson and Crick. But still, I am sure that there are a great deal of fascinating background stories that would make our lives richer, if they were actually told. Imagine what encouragement and boost in inspiration this could potentially give to young researchers and particularly to PhD students!

In this spirit, feeling committed to my own appeal, I would like to say a few words on our recent paper “Do large forest trees tend towards high species mingling?” published in Ecological Informatics.

The story of this paper probably started off during my field trips to Bialowieza Forest in 2011 and 2016, when Bogdan Brzeziecki and his colleagues from Warsaw University of Life Sciences kindly showed me a number of forest sites where a species change has occurred and large remnant trees of the previous woodland community were dominating clusters of different species (see the photo below showing a remnant Norway spruce in a cluster of young hornbeam trees). The image of these remnant trees somehow stuck in my head, thank you Bogdan, and kept me thinking about the possible underlying processes that let to this situation. 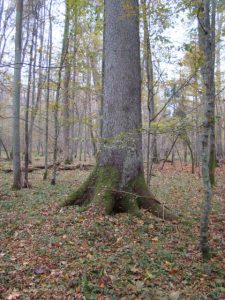 Then in October 2016 I was reviewing somebody else’s manuscript that was submitted for publication. In this work, the author hinted that there may perhaps be a tendency of larger forest trees to be surrounded by heterospecific neighbours in mixed species forests. This really was the trigger and the hint somehow struck me like a lightning: I thought by myself that this would actually be a fascinating research question. I shoved the review papers onto another pile of papers on my desk and dug a bit deeper into ecological theories. From earlier I recalled the Janzen-Connell hypothesis, the herd immunity hypothesis and size-hierarchy processes that describe natural processes of maintaining species coexistence and biodiversity.

One observation in many natural plant populations is that self-thinning leads to local size hierarchies (also referred to as size inequality), where heterospecific stands include dominant trees emerging from a first colonisation cohort, which are often surrounded by patches of smaller sized trees of the same cohort. Small trees of these early colonisers are initially often of the same species as the dominant trees and according to the mechanisms of both the Janzen-Connell and herd immunity hypotheses later decrease in numbers due to self-thinning processes. Eventually the small early colonisers are partially or completely replaced by even smaller individuals of other species from subsequent colonisation cohorts. This combined effect of species and size replacement enforces both local size hierarchies and the mingling of different tree species in a given area or patch and prevents the development of monocultures (see B-D in the figure below). 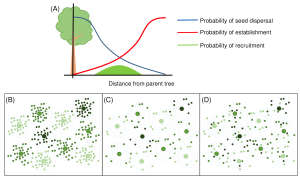 With every new paper that I discovered on this subject the story and research question got even better. It was like tasting new wine all the time. Finally it became clear to me that it would be interesting to study this question for a wide range of different forest types in the temperate and boreal climate zones across the world. In terms of the aforementioned ecological theories, forest ecosystems in these climate zones have to date not been as intensively studied as tropical forest.

It took me a while then to devise a good method for proving the point that there is a trend for larger forest trees towards high species mingling. At first I was thinking about using so-called second-order characteristics from point process statistics. I tried a few things there, but none of the outcomes really was to the point. Then I remembered the species mingling index that was originally devised by my mentor Prof. Klaus von Gadow back in 1993. Of course, this index was about spatial species mingling, so it should actually suit the research question quite nicely.  Still, I needed to establish a relationship between species mingling and size. That line of thinking eventually let me to logistic regression, since I recalled that we often model tree selection probabilities (for thinnings) using logistic regression, where size is an important explanatory variable. Tree mortality modelling is a related topic, where logistic regression is often applied. However, the discrete mingling index can take k + 1 different values depending on the number of nearest neighbours, k. For using logistic regression I thus had to convert the mingling index to a binary variable. Instead of using only k = 1 neighbour I stuck to the idea of including a slightly larger neighbourhood for a better description of species mingling. Finally – after much thinking and trial calculations – I settled on the idea of using k = 3 neighbours leading to four discrete mingling values, i.e. 0, 0.33, 0.67 and 1. I argued that a situation where no or only one neighbour is of a different species can be summarised as “low mingling”. On the other hand, values of 0.67 and 1 indicating two and three heterospecific neighbours describes a situation of “high mingling”. A few validation checks have later shown that this was a good choice. My definition of low and high mingling also allows a straightforward mapping and detection of clusters of high and low mingling in in a forest, see Fig. 2 in the publication. I still remember that this basic idea came to me out of the blue while actually travelling between Umeå and Göttingen.

In January 2017, I gave a first talk on this research to a larger audience at Dresden Technical University (Germany). The discussion following my presentation was interesting and varied. There was some scepticism in the audience, as you often get with new ideas, particularly with regard to the finding that the investigated trend should really hold for many different forest types. This kind of scepticism also came up in the review process. It took much discussion and re-wording to bring the point of the paper across in an appropriate way. Overall we found significant support for the expectation that large trees and trees growing at low local densities often have a tendency towards high species mingling. An explanation for this can be the aforementioned theories, but also disturbances and even forest management. We also found that size differentiation and species mingling are strongly related in local neighbourhoods. This is a very interesting and useful finding for conservation.

Now it would be great to follow these relationships up in detailed studies of specific forest ecosystems using spatio-temporal data. And while working on this topic two new research ideas came to me out of nowhere. An MSc student at Umeå is currently pursuing one of them and the other one is still sitting in my folder of new ideas. Perhaps I will post their background stories here one day, too, who knows.