Growth functions in general describe the change in size of an individual or population with time (Burkhart and Tomé, 2012). Assume that

is a tree growth variable, e.g. tree total height or tree volume, and

is an empirical growth parameter scaling the absolute growth rate. The empirical parameter

is related to catabolism (destructive metabolism), which is said to be proportional to an organism’s mass. Therefore it is often restricted to a value of three for theoretical, biological reasons.

The Chapman-Richards growth function can be applied to both, individual organisms as was well as to the growth of whole populations and describes cumulative growth over time. As such the function has an inflection point and an upper asymptote at

reflecting a so-called sigmoid growth curve typical of growth processes, which are influenced by biotic and abiotic factors.

The Chapman-Richards growth function is based on the seminal work by Bertalanffy for animal growth and was published by Richard in 1959 and Pienaar and Turnbull (1973) introduced it to forestry applications. The model has a reputation of being very flexible on the slight expense of biological realism. It is valued for its accuracy, although there can be problems in the process of parameter estimation when

where the fracture constitutes a growth multiplier (Pommerening and Muszta, 2016) and the aymptote

disappears. The algebraic difference form allows estimating the current value of a growth variable from a value in the past (anamorphic model).

Finally we enter the actual regression code specifying the model, the data and the start parameters. The summary command provides the regression outputs including the estimated model parameters. (Parameter

in the above equation.) 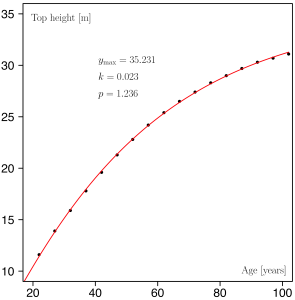 against the maximum value of the growth variable: Both values shouldn’t be very far off, because

is the upper asymptote of the growth function.