Waiting in front of the barn, opposite the summer pastures, now covered in snow

There is one more excursion from the animal housing course I’d like to tell you more about. The same day as visiting the active horse stable, we went to see an organic dairy farm. As we had already been looking at a couple of dairy stables, such as the modern loose housing and the traditional tie stalls at Jälla an the very large facility at Lövsta, we could make some comparisons. Plus, this was the first organic system we were going to see since the course had started. The farm is operated according to the standards of KRAV, which I explained something about in the previous post about our project work. 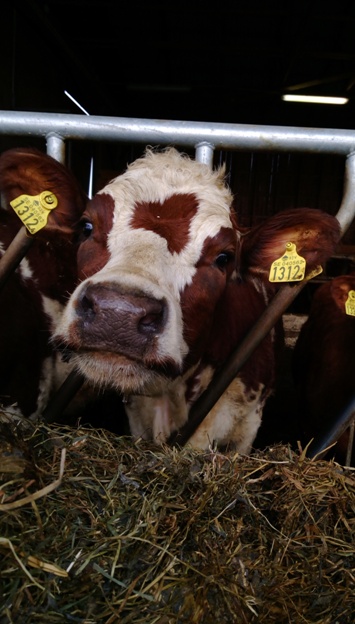 After we had changed into our protective wear we were warmly welcomed by the dairy farmer. He explained a bit about his farm before giving us a guided tour over his premises. He showed us his milking robot, the main herd, young stock, calves and pregnant cows. We had a closer look at his manure management and the types of flooring he used. There were generally large differences between the buildings but all of them were naturally ventilated. Which I think was quite fascinating seen the cold Scandinavian climate, but his Swedish red cows seemed to cope well with it. After the tour we had the possibility to go and look around a bit more for ourselves. 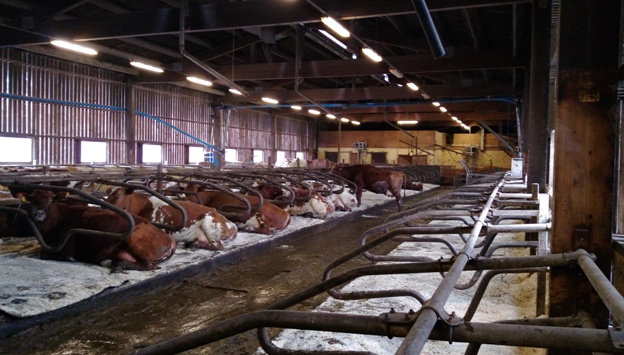 The indoor housing of organic and conventional dairy cows is not that different. I’d say that the biggest differences concern the feed and pasture management, though in Sweden grazing is obligatory for conventional dairy as well. We were lucky to see a calf that had just been born, being licked dry by her mother. We asked the farmer for how long calves are required to be with their mothers, and he explained that it should be at least for 24 hours. He also told us that it used to be longer, but that KRAV has changed this quite recently in their standard. He expressed how pleased he is with this, since in his experience it is less stressful for the mother and calf to be separated after 24 hours than after three days. This information resulted spontaneously in a very interesting discussion about the different rules and experiences concerning calf weaning between the students from our class. It’s a hot topic in many countries at the moment and the opinions on it vary strongly.

Before we went back to the bus we continued to talk for a little while with the farmer. I was curious about what he’d like to improve most and he told me that he’d like to change the housing for the calves. Right now part of the calves are housed in what used to be a tie-stall stable and the ventilation is not optimal. He had noted that the calves in this building perform less well than his calves in the outdoor iglos. A direct example of the interaction between animal and environment.

“Should we build for less durability?”

Our course leader, Stefan Gunnarsson, was wondering what the farmer would like to see from us in our future career as ‘potential farm designers and advisors’. He answered: “Beautiful buildings, easy to work in and should be good for the animals too. Simple.” However, he took me by surprise when he continued about durability. He wondered if we were making buildings maybe too durable? He explained that the materials we use now, result in farm buildings that can live for up to perhaps a hundred years. But after about twenty years a building is maybe not ‘so modern anymore’, and might not fulfil the latest requirements. This results in empty farm buildings – a waste according to the farmer. Should we build for less durability? Some food for thought.

Any thoughts on this topic, or some quiestions? Feel free to reply below.