This summer I went to a farmer’s fair here in southern Sweden, called Borgeby fältdagar. It’s an annual event with thousands of visitors, showcasing machinery, technology and scientific advances in both horticulture and agriculture. I haven’t been to this fair before, but I’ve always wanted to go, and so – finally, I did.

It was an interesting event, with loads of people and companies that I’d met when I studied horticulture. But what I remember most clearly from this event, were my feelings when I saw this sign: 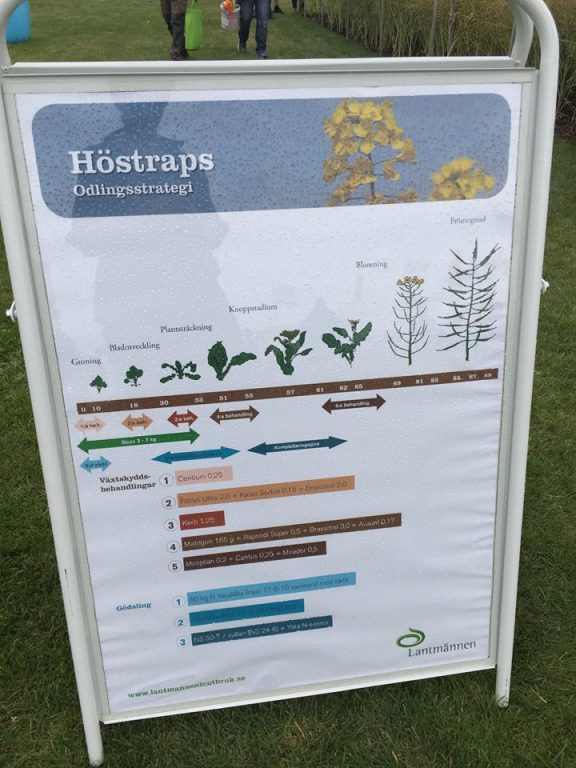 I know it’s in Swedish, and I know that the picture is not supergood either. But it depicts a “Production Strategy” for growing canola, detailing the different growth stages of the plant, and what inputs said plant should get in order to flourish: fertilizers and pesticides.

This probably does not come as a surprise to a farmer reading this text. But for someone who only one year ago truly started to get involved in sustainable agricultural systems, I still find it extremely chocking.

The fertilizers I get, even though they too have negative effects on soil life. But including the use of 4 herbicides, 3 insecticides and 2 fungicides in a production strategy, must surely disqualify it from being called a strategy at all?

But then again, all of those inputs can be sold, generating incomes for companies producing said chemicals. The same may not necessarily be true for a farmer practicing crop rotations to reduce weed and pest pressure (by breaking the life-cycles of these organisms). Or by intercropping to reduce weed pressure, or even using heritage varieties that perhaps yield less – but may also be more resistant to pests.

So where am I going with all of this?

I realize that we can’t immediately ban farmers from using pesticides. But having a conversation about it is vital.

Perhaps the amount of pesticides recommended in the strategy shown here is not dangerous to humans at all. Let’s even say that they have no negative impacts what so ever on the ecosystems in which they are used. You know what? Their mere use blocks innovative farmers from trying alternative strategies out. Including developing new, locally adapted varieties, and/or finding other strategies that may make the use of these chemicals entirely unneccesary.

Perhaps finding such strategies will be impossible. Perhaps it will just be really hard. But if we don’t try, we will never know.

What do you think?

If you enjoyed this article, please consider sharing it!