Spring is turning into summer. The seasonal warmth is being replaced by chilly winds and changing of the tides. Students begin to feel their time here is coming to an end and the last weekends have been filled with one feast after another, in tries to squeeze the last out of the time left. While walking on sunny streets last weekend one could feel the pressure along the craving gazes. Expectation blended with collective iron will – it was spring ball. The night after, youths still laid dormant 🙂

Now the Interdisciplinary practice course is done. The last presentation of the cases was last Wednesday. Now there is one last step left until finish line 2015 – The cabin(s). There the final exercise in the Discourses course will be dealt with before the year is done. That will be the last time together for the remainders of classmates. Already a few has steered their ships homeward. It will be up to the lingering souls of Sustainable students to make the best of it.

I myself am contemplating about my time here in Uppsala. Just as I expected one have met more new faces of which the very most represents personal traits already experienced before. People are not so different wherever they are from. The ease in the heart have once again grew steadier – it doesn’t really matter that people are coming and going since the last ones are always replaced by new ones, taking over the same traits. Perhaps the quality about them is increasing for every time – so why bother regretting or let ghosts of people take the best of you since the next ones will only bring more quality with them. Better focus on the positive memories and possibilities, until next time.

With the Interdisciplinary course done, the evil math behind me and the promise of a decent accommodation early in June I lean back in the chair with the hand over the shoulder, saying Good work Erik! You have done well!  I really feel that I have – once again. The resit date is on the 8th of June which hopefully will be the very end of this study year. My time here in Uppsala was to be devoted purely to studies and so it has been.

Now I´m mostly waiting answers from SIDA via FUF about Internship during the next semester. The more I think of the issue the more I begin to feel that FUF understood better than me, being first surprised by their choice, where my competence really would be needed. First after FUF linked me to their recommendation of own accord FUF passed me through the first selection cycle of the positions I found myself. I really do believe the administrators at the organization saw between the lines what I really was asking for without knowing it myself 🙂 Still I haven´t heard anything from SIDA since they took over but I´m waiting.

So… while spring progresses into the summer´s first period of chilly rains and coming events of good byes I´m surprised over the warmth in my chest, having figured out one or two things about life.

/See you at the other side^^ next time

There has happened one thing or two since last time. Firstly I heard the other day I passed the evil math! With that part finished I can rest a little upon that accomplished lifeline. Regrettably communication about resit date has stagnated yet again.

Furthermore I passed the home exam in the Interdisciplinary… course, although with a pass owed to late submission. Things outside school have worn on me for a while so during the circumstances I feel rather satisfied anyhow. Hard to believe anyone could have managed any better actually, with one hand clapping the other shoulder.

I also managed to gain some ground in the Worldviews and discourses course. I sat during 5 hours and completed remaining feedbacks until the third and last submission/feedback circle. Today I plan to start up my discussion groups’ last study circle assignment.

The case study goes steadily on. While I was very active during initial parts, acting as a ball plank for the members for issues and questions, I now sit all back in the buss. With the deadline on Friday many feels rather pressed. I although can´t ignore a feeling of being actively pushed backwards by the others. In any case, I don´t mind too… much, since then I have time doing other stuff.

With the case, resit and a last couple of cycles left in the Discourses course I begin to feel that perhaps I´m gonna, although setbacks party with the accommodation, complete the first year on time.

Anyhow – two weeks to go and the evil math behind me! I can smell closure!

Sunday morning and on my way to bed after a rather none productive night. Mostly ended up playing cards with myself. “It´s although a Saturday night” I told myself. May have started disappearing in front of my eyes and I wonder if I really understand that in a couple of weeks or so one going to see most of the class disappear. I haven´t spent that much time with the others though. Actually I haven´t spent any time with them, but the teachers have promised a trip to a cabin during the last few days. So who knows. Doesn´t seem to have much choice^^

I half couldn´t believe the relief of sending in the home exam during last week. It took a couple of days for me to realize that a quite big part of the Interdisciplinary course had been done. Such freedom! I feel as I´ve made a real swing back at the clutching jaws I´ve had nipping at my legs since the announcement of the task. It was rather tricky and a bit intangible but will surely serve its purpose making one more familiar with groping around buzzwords.

After a couple of days from that I asked the program coordinator being present in Uppsala, the answer about the resit day magically appeared. My knight in shining armor once more comes to the rescue. So hopefully that issue is gone from the to-do list. Last time she disarmed ignorant teachers of their laser pointers during at least one course.

The case study has, as announced, changed its course and stabilized on urban greening and I believe that course is going to hold. The emphasis is much on the framing of the method. I don’t know if anyone really has 100 percent track on what we are doing, since the different disciplinary backgrounds make things rather blurry. It´s been interesting and it seems as if people have learned from the last case study – this time everyone is more careful and perhaps even tend to listen to others adding to the approach.

Summer has come to Uppsala followed by its accompanying warmth. Flowering fruit trees in all their splendor mingled with beautiful hedges are eagerly visited by humming bumble bees. Salient green lawns colored by seas of spring flowers, straddled by strollers and bicycles in city parks´sunlight. All to the sounds of laugher and joy.

Once again some too many days squeezed themselves between the glimpses in the palantír. I hope you haven’t waited too long. The first year is approaching its end and so is the remaining stamina. That´s the reason for my late blogging. Will try comensating by writing a little more instead^^.

A few days has passed since the awaited, by many students, Walpurgis evening; or in Swedish: Valborgsmässoafton – the great folk fest of the year in Uppsala. Yesterday I mostly spent listening to students about how wasted they were since. Local news papers declared it a new record – 100 000 people celebrated Valborg in Uppsala. While most students held strictly to parks and events in thousands during the day, I did my best to avoid the most intensive parts. When the fires were lit during the evening many students joined in front of the big fire at Old Uppsala hill, before returning back for the awaited night parties at the so called Nations. Myself joined a less intensive fire cozying among young families, while watching the flames tell  its story about fates and legends long gone. 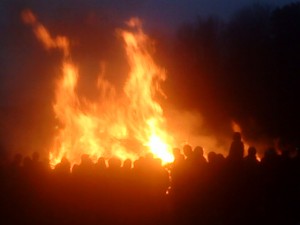 Concerning school I begin to feel how much the evil math did wear on me. Regrettably I´m also having a one-way communication with the course leader in question, making me stumble in the dark about the resit date, fearing I missed it… which´s feeding the growing dislike for the course even more. Just draining energy!

I begin to wonder about prospects of completing this year in time – a concern that has kept lurking in my mind since the analysis course. Right now it´s mostly about keeping the calm and take one thing first.

Actually, I´m about to send in my home exam in the Interdisciplinary practice course this night. After sacrificing almost the whole course owed to the evil math, I feel thankful the teachers saw to it that, one way or another, we [will] read literature. Earlier experiences forced them to make it mandatory since many earlier students skipped classes for various reasons. The task was based on literature spanning social fields – a trait of the whole course. It has not been my favorite course but still one of the most important.

The Case study goes on but has changed course a few times. We natural science oriented students gave way to socially oriented ones to dynamically change the approach for the method to fit with expected analyses. This was something I have been told never to do as natural science student. This makes it interesting for me that want to incorporate other´s competence. We are on our way and much has happened the last two days.

The discourses course goes on but I´m having serious trouble keeping pace. There are articles now and then to be analyzed, while we are having a rather intensive feedback exchange within small groups of the What about me book presented before. That´s going to be my next endeavor alongside the case study when the home exam is concluded.