What have you done before your master’s programme?

I have studied a bachelor’s degree in forest engineering and natural resource management in Spain followed by a masters in forest sciences here at SLU and at the University of Eastern Finland.

I have a glimpse of my grandfather (morfar) holding me when I was just a kid so I could reach the top of the fence of a bull farm for feeding them apples.

I wanted to study the science behind wildlife management. I felt it wasn’t enough with knowing which wildlife species we have and how to manage them. Thus, when I came to SLU last autumn for my forestry MSc, and I got to know the programme, the wildlife manager/scientist inside me wake up again. The whole master’s programme was quite appealing and many people recommended it, so I decided to stay here in Umeå and enrol it.

I love cooking, baking and being outdoors. So every now and then I ask myself I should become a cook instead and move a mountain station for feeding hikers (and scientists doing field work) with delicious meals 😉

I would like to work as a forest engineer/scientist dealing with wildlife management issues. And of course having still enough time for cooking and baking. I have realised that Sweden is the place where I feel the best with myself so far. So Jag pluggar Svenska nu! It will take some time but I hope to get my dream job here.

Them all! But I have kind of more sympathy with the bird genus Turdus. But anyway, seeing any kind of animal in the wilderness always creates a feeling a happiness on me. I hope it doesn’t vanish with the years! 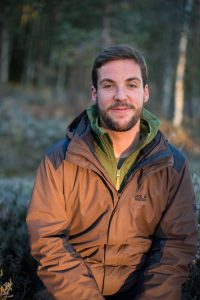 What have you done before your master’s programme?

I got a bachelor’s degree in biology from University of Ljubljana and wanted to continue my masters abroad. I first studied in Umeå as a master student of ecology at Umeå University, but have since changed to MFPW at SLU. No university is perfect, but I’m happy with the change and would gladly do it again.

Uff, I don’t think I can point to a specific first one, but growing up in a countryside, I remember roe deer coming up to our garden in the winter and eating whatever was green and sticking out of the snow.

I’ve always been interested in wildlife (no so much in fish) especially carnivores. They represent the wilderness to me and I am so grateful that such a small country as Slovenia has the big and scary trio. Relationships between predators and their environment are of particular interest to me, recently also human dimensions of nature conservation/management. I went to study my passion thought, fully aware that at one point I will probably have to make money some other way, while wildlife will remain a lifelong hobby.

I’m an ecologist with an internal struggle. I don’t believe humans are a sustainable species in any way so it’s just a matter of time before we destroy ourselves and the environment. Why save it then? I give evolution full points for trying, but sometimes things just go to shit and you end up with a failed science project.

If someone pays me to travel the world and take pictures. Not really looking to jump strait into the job market after graduation, I need to travel and get lost for a while.

Wildlife, birds, fish; in that order of preference.

My questions: Beer, wine or whisky? I head you lived in many different countries, which one is your favourite, and why? What are you afraid of? Through a complicated (but totally believable!) process you got selected as a new master program coordinator. What would you change? What do you strive for the most in life? Last question will be the same as yours: fish, birds or wildlife?

Thanks for the extra questions Matej! I’ll answer them in an upcoming blog entry (I’ll paste a link below). 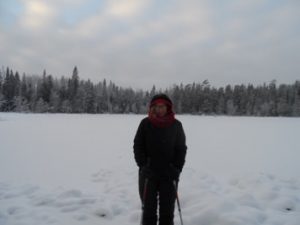 What have you done before your masters’ programme?

Probably going to the zoo.

Last year I was doing an Erasmus programme at Högskola I Gävle. One day we had a guest speaker (Frederik Widemo) who gave the most amazing moose talk ever. I had been looking for a place to study something moose related, so afterwards I went up to ask if I could study this somewhere. He recommended this course, so here I am 🙂

Archery (no bow hunting though). 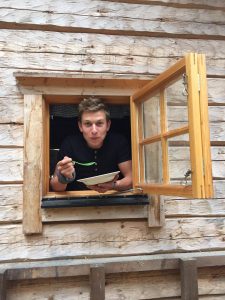 Goodmorning! What are you doing up so early? Photo: Sebastian Elze

What have you done before your masters programme?

I studied 6 semesters of forest sciences in Dresden, Germany, so this is my exchange semester in Sweden to see how you Swedes are getting along with all the wildlife

Excluding all the “pet memories”, my first impressive memory with wildlife which I can remember includes two deer, storming away when we have been approaching in the forest right behind our garden when I was 5?!
What made you good to go for fish and wildlife?

It was and it is a quite big part of my entire life so far and since it is bound to forestry and everything which comes along with it, I thought this is the right time to get a closer idea of what it is about. Not fisheries though but it’s nice to get closer look to that as well 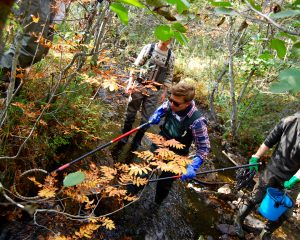 Are you sure Sebastian? You seem to think that this pretty interesting! Photo: Hannah Benath

Well… My first time I went fishing was in Sweden!! Hällefors olé!

Depends on what I will graduate with. I think about something within the wood industry but I have no idea about my dream job yet, sorry bro! 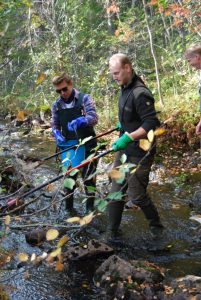 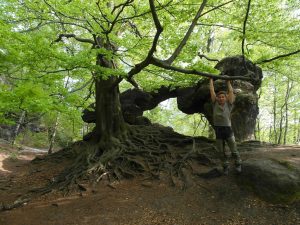 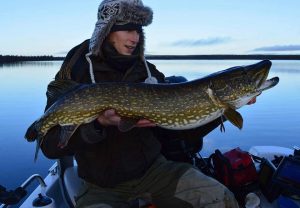 What did you do before enrolling at F/W?

I’m very glad you asked this question Carl, as it lets me elaborate on one of my favourite matters, in fact it is one very dear to me. The topic is of course me – and I can talk about myself for hours! So, after upper secondary school where I took the science programme I did a year of national service in Boden.

Not having decided on where I wanted to continue my studies after conscription I took a few years to consider my options, meanwhile waiting tables in Stockholm. To my surprise I quite enjoyed the restaurant business, but after some time it became apparent to me what I probably had always known – I was going to be a biologist. From that point the way to the bachelor programme in Biology at Stockholm university was short, and the road through it straight. In fact, I still wonder why I didn’t start it sooner, but I guess sometimes even the things in life closest to heart aren’t obvious.

We’re now approaching the time where I decided for the fish & wildlife management programme, but I once again felt I needed firmer anchorage in life before choosing an academic field to specialize in. Mostly to buy some time, but also to broaden my views, I took one semester of biology studies in Canada though an exchange programme and (although reluctant at first) I found it a great experience.

At the point where I was almost finished abroad I felt a strong urge for something my years at the university unfortunately had not provided me with, and that was insights in the working life of a biologist. As luck had it, I was able to find an internship at the County administrative board in Södermanland, working with the county fisheries adviser for ten weeks. With a bachelors degree, a semester at the other side of the Atlantic and having seen a possible career path up close I finally felt well prepared for graduate level studies – and here I am.

As a kid I had the great privilege of spending my summers in a country house on an island in the Baltic sea. I remember stalking grass snakes in the garden and netting sticklebacks from the docks as well as being bitten by the ants in the forest. But my first memory of animals is probably of the grasshoppers that I caught on the lawn and kept in glass jars. For some reason (to my defence I was five years old) I named them all Anna-Greta, and if my parents had not insisted on me releasing them I would probably have kept them way longer than what would be considered ethical for a naturalist.

In the end, what made you good to go for fish and wildlife?

There are, without a doubt, many ways to narrow down the search for the education that fits your interests best. My way may not be the smartest but, with the risk of appearing boastful, it could very well be the simplest. Having quite a bit of an interest in aquatic life in general and fish in particular, stemming back from further than I can remember, I knew what I was looking for. And as it happened there was only one masters programme, and still is to my knowing, in Sweden that has the word ”fish” in the title – from there the choice was easy! 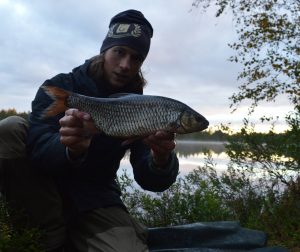 I wouldn’t call it a hobby as much as calling but I consider fishing the most rewarding of pasttimes. On rare occasions, the sheer bliss of sitting motionless in a boat, freezing and eating dry sandwiches while not seeing even the glimpse of a fin, can be closely matched by the thrill of spotting a bird of a species I’ve never seen bfore and managing to snap the perfect photo of it. On rare occasions, that is.

I find the idea of the dynamics between learning, field work, desk work and teaching involved in a PhD position highly compelling. There are many topics I can see myself researching but one matter I would  thoroughly enjoy investigating is the contrast between sportfishing and commercial fishing in terms of economic value, social value, and impact on fish populations.
Fish, birds or wildlife? 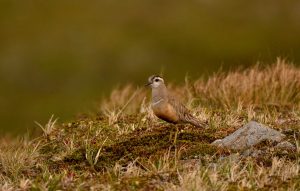 All pictures have been supplied by and published with the permission of Anders Forsberg. 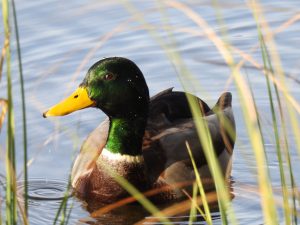 I’m proud to present that during the coming weeks I’ll be phasing in a new type of blog post, where you’ll get to meet those of us taking the fish and wildlife management programme!

You’ll get a picture of who we are, working through from our background to how it came that we first applied to the management of fish and wildlife programme and straight through to where we would like to end up! Hopefully you’ll get a better feel for if F/W is the right way for you.

Each week I’ll present a fresh profile of an unique interviewee from F/W, so stay tuned! 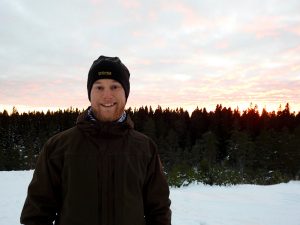