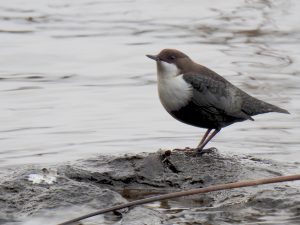 White-throated dipper that sat down by the lake.

As this year draws to an end, we’re getting ready for an (we admit, oddly timed) final exam for our course in Applied Population Ecology. Nevertheless, I get some time to get out and get some pictures, some of which I’ve featured below. But hold up, don’t think I’ve forgotten you! 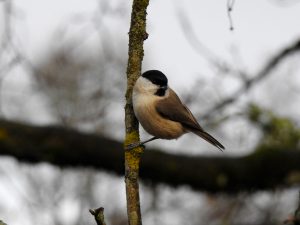 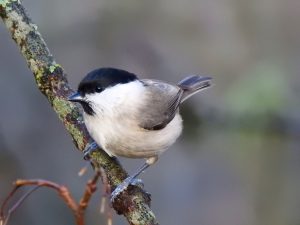 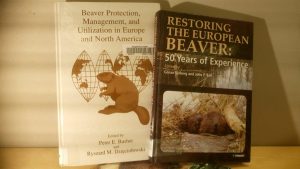 A couple of books for those interested in beaver management!

This week we have been largely focused on what characteristics that defines a species as invasive – or rather, of invasive potential!

As most of us know, there is widespread alarm that human encroachment upon animal habitat and climate change may have averse effects upon global biodiversity – but how many know of that invasive species are considered an even higher threat at present by many conservationists? Or in some cases, even a threat to us?

There’s no shortage of examples of where species have drastically changed their environment, certainly where humans have introduced non-native species:

Or indeed even the reintroduction of certain species. Beavers, for example, are a premier example of successful reintroduction of native fauna that had been driven to extinction by unmanaged shooting. This may come with unexpected benefits, as beavers are what we call an ecosystem engineer – that is, they change their environment to their benefit!

Most of us know that beavers can build dams. The resultant flooding of an area can lead to for example an increase of dead wood (substrate for many insects and also provides habitat for fish), but can also slow down the rate at which the water flows through the system. That means that sediment or maybe even pollutants have more time to settle.

Unfortunately, these dams can become major problems for the locals – they can cause harmful destruction of agricultural lands and loss of income, they “harvest” trees which could’ve been sold; beavers can also undermine infrastructure such as roads and cause them to collapse. 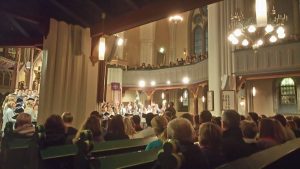 Umeå City Church was filled during the performance

As Christmas is closing in and an increasing number of students are leaving for home, there is still much happening – last Friday I went down to Umeå City Church to see  Nationskörens christmas performance. Nationskören is open to both students and non-students alike. They mostly perform in Swedish, but there is often a variety of international  elements which you might recognize!

Coming around towards winter season, a true movie-lover like myself can’t stay away from the winter releases  – so far having being treated to “Fantastic beasts and where to find them“, which (rather naturally) I absolutely loved! If you haven’t seen it already, make sure to have a look!

Bonus picture:  Regarding another recent film release, I’m sure we can all see the likeness between the evil glare from this passerine and a certain Sith! 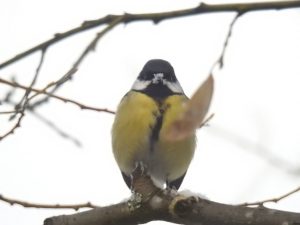 Where have I seen that quest for world domination before – Darth Vader?

In the midst of the Applied Populations course right now, our work is based mostly on self-studies, where we are guided or introduced to a subject by a lecture, and then given assignments to promote us in furthering our searchlights beyond the lecture content.

Out of the assignments handed out so far, we’ve covered a broad range!

Which one do you think sounds the most interesting? Leave a comment below and let me know! 🙂 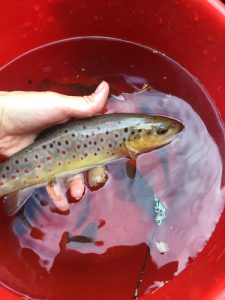 One of our captured (but soon released) Brown trout. Photo: Johanna Hägglund

Turns out winter has decided to turn around at the doorstep – today I was met at the door by cold gusts of freezing rain settling down on the slush that remains of the snowfall we’ve had. So I thought it’d be the perfect day to look back at the mini-course in electrofishing we had during the Census techniques course earlier during autumn!

Everything was set up as a part of the county administration boards continuous monitoring program, where they look at salmonids in Ume River as part of ongoing restoration and conservation work to see how alternative routes around the hydropower plant are functioning!

In this massive project, they use very many different techniques for counting fish, but for small tributaries it’s effective to electrofish – basically, you attract fish with an electrified rod. As they’re swimming out towards you, you catch them with a hand net and hand them over to an assistant who’s in charge of holding a bucket for the caught fish and keeping the cord to the generator under control so nobody slips.

After they’ve been caught, they’re put into buckets of fewer fish with fresh water so they don’t get stressed. They then receive anesthetics which is dissolved in the water in each bucket. Once they’re calm and relaxed, the researchers have their chance to quickly take the measurements they need: for this project we jotted down each fish’s species, sex; if the fish was a male: if it was producing gametes; and length. 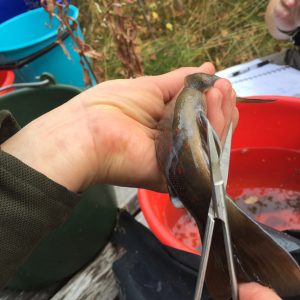 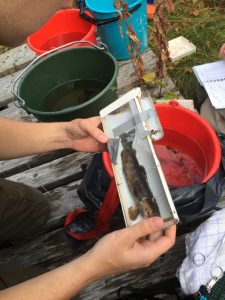 In this picture I’m measuring the length of a trout – you’ve got to be quick! Photo: Johanna Hägglund

And some 30 seconds to a minute after starting, the fish is put in a recovery bucket until we are ready to release them back into their stream once we’re sure we’ve counted most of the fish in this area. 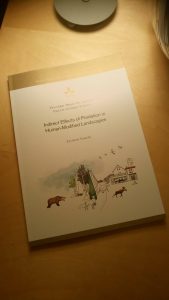 This Friday we attended the doctoral dissertation of Ellinor Sahlén, who’s been studying how animals behave in a landscape altered by humans and what happens when large carnivores return.

Up until now, most studies on the return of large predators have been conducted in North America – or even more precisely, a lot of work has been based around the return of wolves (like 28 million others, you might have seen How Wolves Change Rivers) to Yellowstone national park. But what happens when large predators such as wolves or bears might return to a landscape shaped and changed by mankind? Will their return still yield the same massive changes to the landscape as we’ve seen in North America?

Among other things, Sahlén found that even though some Fallow Deer have never smelt scent from a bear before in their lives, they try to seek out more open areas when they feel there is a risk of being predated so that they can escape quickly. Herbivores also browse differently in these areas, which affects how the herbivores preferred plants grow.

However, in a landscape dominated by human interaction, one might not expect as drastic a change as seen in the pristine Yellowstone national park – in very fragmented habitat or  production forest landscapes which are clear-cut every 80 years, the trophic cascades can be relatively minor.

As Sahlin stresses, successful reintroduction of large carnivores is a delicate matter which requires close cooperation with the locals, who should be made aware of how their lives might change by the presence of a large carnivore, as sudden or unexpected negative effects can set the arena for decade-long conflicts between conservationists and local inhabitants. 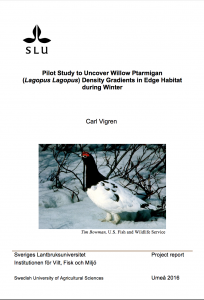 I guess there’s just something about writing a piece of your own – whether it’s the time it takes, the passion you find, or just something completely else?

As I’ve mentioned earlier, my project was all about the Willow Grouse (Eng.), or Willow Ptarmigan (Am.). But to put a twist on it, I decided to niche into exposing density gradients in edge habitat to understand how well they use the surrounding environment! This can become important to understand if climatic changes causes the environment to change, or their habitat to become smaller.

There are a few ways animals can react to climate change if their habitat is lessened, here follows a non-exhaustive list:

1) They can move, and find their habitat in another place.

2) They can adapt to their new environment by the selection of suitable traits.

But what will the willow ptarmigan do? Will it hybridize with the rock ptarmigan and pick up suitable traits? Will it utilize an increase in habitat such as after the pleistocene? Only the future can tell – but I’d rather make sure I’m not surprised! 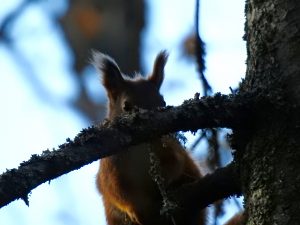 Did I make it?

After some grueling, high-paced 5 hours, the exam for the fish and wildlife census techniques was finally over! Although open-book and with any aid you can imagine spare answers from previous years and communication with others, this type of exam might spread a false illusion of security – but will really give you a run for your money and test not only how well versed you may be, but also how smoothly you can tackle different types of questions! So it undoubtedly rewards those who have put time and energy into their problem-solving skills, and those with excellent computer skills. It really comes down to playing to your strengths!

Had time to learn to use specialist software for this technique? – You save time!

Know how to read output without a guide? – You save time!

Master at Excel? – Why need specialist software when you can do it all in one programme?

Good at time management? – You’ll get the most points out of the exam if there’s not enough time to answer all the questions, take your pick!

But there’s one skill that’ll play stronger than any other – developing the grit to keep at it:

Good at rewarding yourself and your friends? Great, you’ll be ready come next round! 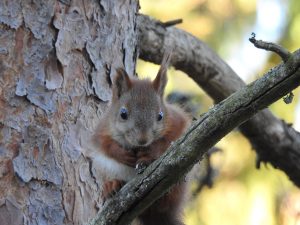 I guess it’s time to get used to the real world, again! 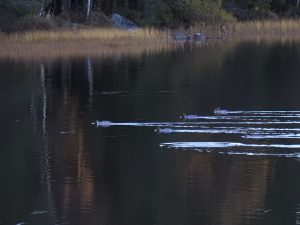 Working together… or just in close proximity of one another?

As an earlier post has mentioned, this week has revolved around animal welfare – which has included not only individual projects where we must formulate our own opinions, but also group assignments where we’ve created in-depth scenarios to fill in and evaluate applications to ethical committees – which we both presented and defended our application to a board consisting of 3 people to represent politicians, lawyers and representatives from organisations working with the ethical treatment of animals. Subsequently, we also commented on another groups work. Practice makes perfect!

My group worked with the greysided vole, which in Sweden has been in stark decline since the 1970’s – which has been connected to habitat fragmentation. But the real question is: did my groups work stand up to the trial by our peers?

The quest for the answer goes on……! 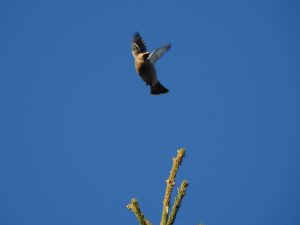 Free as a bird!

This week has handled a lot of interesting ethical questions regarding animal welfare – and rightly so! As managers or researchers frequently deal with live animals it becomes exceptionally important that we do not only understand what national or international law states and the conceptual origin of such, but perhaps most importantly – that we also formulate our own opinion which will guide us throughout our careers.

A classical question wherein it has been found that students seem to in about equal parts prefer both alternatives: “Is it, better that a large number of birds each receive one moderately painful procedure – or that one bird receives many procedures?”

Perhaps as a result of that schism, the swedish animal welfare law already states that it must always be the cost for the individual animal which is to be considered!

We’ve also covered how to systematize the development of ethical guidelines. One way to do it may be using the 3 R’s:

Replace – Is it possible to conduct this study without the use of research animals?

Reduce – Is it possible to use fewer animals to a satisfactory result?

Refine – Is it possible to change the way we handle the animal? Can we improve the procedure or perhaps even create simulations?