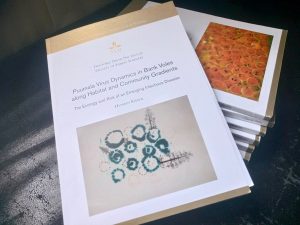 We recently were invited to come see the phD defence by Hussein Khalil, one of our best and brightest up and coming researchers, who’s been looking into how we can understand disease transmission and prevalence. In his thesis, he’s been focusing on how the Puumala Virus is spread by the Bank vole, and how disease prevalence is affected by competing species (field vole, common shrew) or predators (Tengmalms owl).

What’s truly astonishing is that this is one of the very first works which look into how disease dynamics are affected by several different species. It attracted positive reviews from the opponent, Professor Ostfeld, who called Khalils thesis a huge leap forward in wildlife epidemiological research!  It draws attention to a paradigm shift in how we see diseases which spread from animals to humans not only as between two species, but in an ecosystem context wherein the disease is affected by community interactions, the prevalence of several different species, biodiversity, and human action.