I’ve always had a hard time explaining what I actually do study. Especially for the older generation, such as my grandma. My attempts were utterly desperate to make it clear, to give farming advices when to sow carrots or when to prune the fruit trees are completely out of my profession.

But the time has come, and last weekend we established a vegetable garden together with some friends! We’ve had the idea in mind earlier already, the only problem was the lack of suitable place for growing anything. So when a friend of us gave an innocent hint that he had too much space in his garden, we immediately pounced on the offer.

We started right away on Saturday, and the first step was to try to find the best spot for the plot. 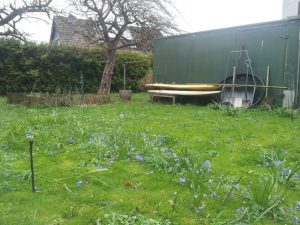 This is how it looked like when we decided on a spot next to the apple trees. After measuring and marking the plot, we could only dug it up with heavy heart removing the pretty bulbous spring groundcover. Then, the workflow continued with the heavy digging procedure which was followed by the harrowing of the 3 squares. 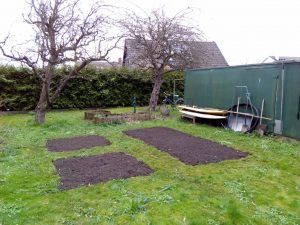 We are still ahead of the big adventure of growing the veggies but as you can see in the pictures, the preparations has started. And despite my few lines’ description, believe me, it was quite a demanding work with a guaranteed sore on the following days.

So even though it had more of an experimental reason to grow some crops, maybe soon I can serve my grandma with some useful “how to do” tips. But perhaps, it would be rather her, who has some comments on our unconventional way of gardening.