Now, I am almost at the end of my current course, Landscape in Transition which started in the middle of January. As getting to the finish soon, besides acknowledging the gist of climate change and working on our final task we have finally reached the big bang of the course: the long-awaited excursion!

After all the dry classroom sessions we went outside to observe and discuss impacts and adaptations to climate change in South Swedish coastal rural and urban areas. We visited places and municipalities, which faced the impacts of climate change. Most of them were cities at the coast, such as Höganäs, famous for its pottery with special icing and Ängelholm (it has an ice cream factory!) that are both about an hour drive from Alnarp.

Unfortunately I can’t give an explanation of all the places we took a halt at but I want to show you one example, which shocked me: the eroding coast in Jonstorp.

Here the sea annually eats up at about 1 meter of land. Can you imagine that? They have an extreme erosion due to the devastating and frequent storm surges that climate change causes. This wouldn’t be a huge matter in itself if there weren’t anyone living near the coast. But in fact, in Jonstorp the houses were built quite close to the water so that the owners can take pleasure in the view. Now, with the increasing number of extreme storms each year, the sea is taking the properties away from bite to bite. Another result of the coastal erosion is that at some places the famous walking route, Skåneleden is cut in its continuity due to the shrinking land, as you can see in this picture as well. It obviously creates a difficulty for hikers. Okay, even though the hiking path is not necessarily the biggest problem, it also shows that erosion isn’t picky at all and is only taking the soil away but also the things which are built on it are disappearing. 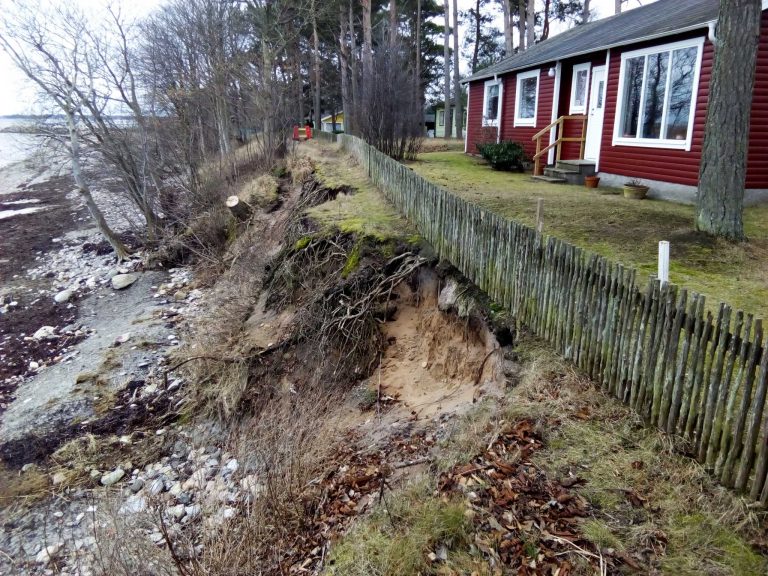 Actually, it’s not surprising that many of the plots are for sale and the value of the apartments has immensely dropped. To me, a strange thing in the case is that the municipality does not take any responsibility for repairing or reinforcing the eroding coastline but the property owners are left alone to deal with it. However, usually this is not proved to be a right and correct solution… It’s hard to say what I would do if my home was threatened by such a situation and I need to be afraid when the next “attack” was coming to destroy my garden and my house… Frightening!

Luckily, after that five minutes we went back to the bus to check a positive example. In Munka Ljungby they made an attempt adapt to climate change by building rain beds. But that comes in the next blogpost…

By the way, do you know how close is the next coastline to you?